Killer Vines and How to Spot Them

There’s nothing as stately as a red brick house covered in green vines. This iconic image has been portrayed on television, in movies and, sometimes, in actual neighborhoods. Little does the general public that are busy oohing and awing at these buildings actually know, they’re really watching a house being destroyed bit by bit.

Clinging vines are some of the worst things nature throws at your home on a regular basis, but a lot of homeowners have no idea because it’s death by a thousand cuts. Any one day isn’t probably hurting your house much, but as time passes, more and more hidden damage is taking place.

Sorry to burst your bubble, but if your house has vines running up it, it’s time to figure out what you’ve got growing and start getting aggressive about destroying damaging vine infestations.

Telling the Good Guys From the Bad

Not all vines are the Devil — it just so happens that most of the ones people like to train up their houses are. This may be because they hang on for everything they’re worth, so a strong wind or a violent storm won’t result in a massacre. Whatever the reason, it’s led to a lot of damage to homes for hundreds of years, even if the homeowner never knew it.

Identifying damaging vines isn’t difficult, even the beginner horticulturalist can spot the differences once they’ve been shown what to look for.

Elements of a Damaging Vine

Vines don’t set out to destroy your home, they’re merely doing what vines do: climb. It’s just that some of the climbing methods that vines use tend to be fairly destructive in a long term kind of way. Vines have several different methods they use to climb. Some will literally grow in a spiral form to wrap around a nearby support, others send out specially modified parts called tendrils that coil around whatever they can find.

Those two types of climbers are basically harmless, at least as far as your siding is concerned. The real killers are the vines that climb using an adhesive disk or adventitious roots. Both adhesive disks and adventitious roots are very difficult to dislodge once they’re established. You can imagine how this kind of tenacity could bust masonry, dislodge vinyl siding, pull down gutters and lift shingles from your roof. 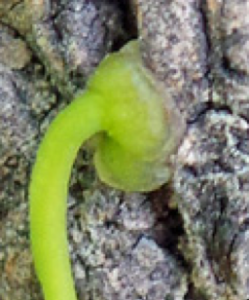 Vines with adhesive disks literally have shoots coming off the vine tipped with roundish pads that grip tight using an adhesive that the plant produces. A common troublesome vine that uses this technique is Virginia creeper (Parthenocissus quinquefolia). Virginia creeper is a beautiful disaster for houses pretty much everywhere. In the summer, it’s a deep green and as fall approaches, it turns to a burning red-orange. It can be hard to make a villain out of a vine like that. 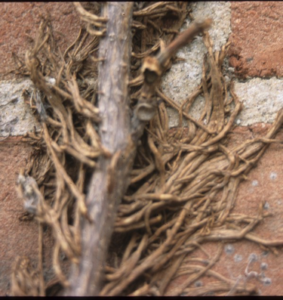 Adventitious roots are a little less complicated, biologically speaking. These are just extra roots that the plant uses to grab hold of things by penetrating any available crack or nook that’s available. The plant doesn’t care if that happens to be a crack in a brick on your house or a nook in a tree somewhere. These structures look a bit like the air roots that orchids produce, or, for those of you who don’t cruise the floral department at your market, they can appear much like thick hairs and cause a centipede sort of effect on the leafless parts of the vine. English Ivy (Hedera helix) is a champ at producing these roots and also climbing up houses.

The vines that could be destroying your house already aren’t some kind of plague or an unlucky hand you’ve been dealt. In almost every case, they were planted purposefully. In fact, you can get them at your nearest greenhouse or home improvement store. Neat, huh? People go in looking for a vine to train up their house, then they leave with a bag full, not knowing what they’re about to do. A few examples of the worst vine offenders include:

Wisteria (Wisteria spp.). This glorious vine with hanging purple, white or pink flowers can make a dramatic statement when raised in the right spot. When it’s close to your house, however, the statement it makes is, “I’m about to destroy your siding and your roof.” There have been many cases of Wisteria getting out of control, climbing to the roof, invading the gutters and lifting shingles off of homes. It’s an amazing plant, but keep it far from your home.

Virginia Creeper (Parthenocissus quinquefolia). The configuration of the five-part compound leaves of Virginia creeper has caused a lot of confusion for homeowners, with some believing it to actually be poison ivy. Virginia creeper is not a plant to worry about from a medical standpoint, but it does put out both adhesive pads and, as it grows, adventitious roots, making it one tough sucker to uncling from your house.

English Ivy (Hedera helix). If there was an Olympic category for climbing and also plants were allowed to compete, English ivy would probably lose to a human that can move faster than it can. But, for a plant, English ivy is quite fast and strong. It’s also enormous. A single English ivy vine can grow to 80 feet in length. That makes it more than capable of climbing to the roof, consuming your television antennae and anything else that it fancies.

Climbing Hydrangea (Hydrangea petiolaris). Like English ivy, climbing hydrangea can be a tough number to contend with. The masses of white flowers are awesome, but the adventitious roots will invade any space they find to hold tight, allowing the plant to achieve its full potential: 80 feet of vine growth. Don’t kid yourself, this isn’t a plant to put near structures.

The Indirect Problem With Climbers on a Structure

Beyond being able to cause direct damage to your home anywhere and anywhere they can get a root in sideways, growing climbing plants on a house opens you up for all sorts of interesting problems. Remember that the environment under that mass of leaves is generally very humid, making a perfect place for mold, insects or rot to take hold.

There’s no question about it, growing a vine on a house is really a very bad idea. It was traditional at one point, but now we know better, so we should do better. Tackling an established vine is no picnic, but with patience, consistency and plenty of herbicide, you can wrestle the monster to its death. Removing all the attachments is a different story, though. Depending on your siding and the type of vine you’ve killed, you may just have to learn to live with root remains until they finally dry up and blow away.

Not Ready To Go On A Killing Rampage?

If you can’t bring yourself to destroy the vines that are trying to destroy your home, or you simply don’t have the time, log into your HomeKeepr community. You’ll find highly recommended landscape contractors who can not only remove those killer vines, but suggest vines and other landscape elements that will be more compatible with your home and your longer term remodeling goals.